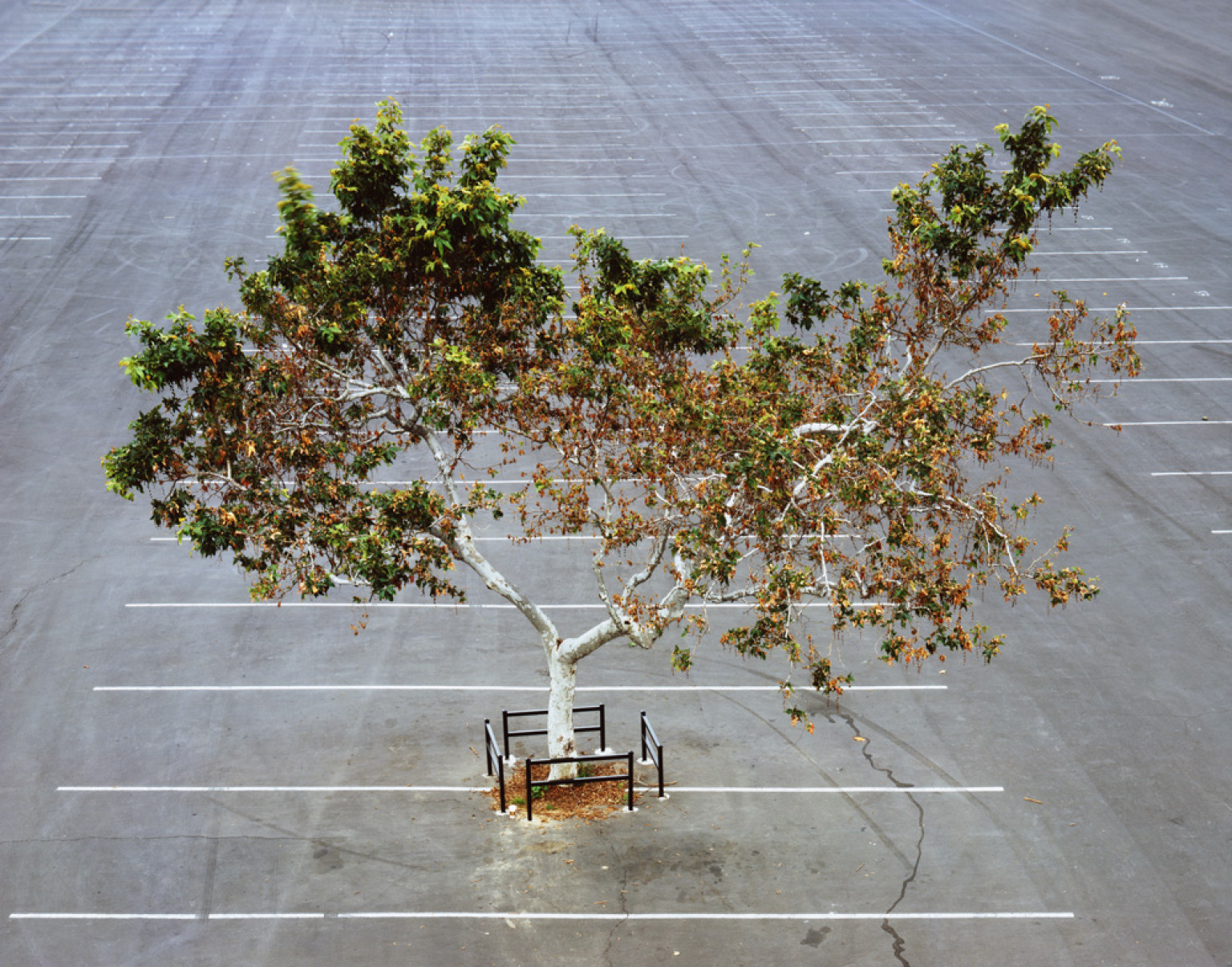 „I have fallen in love with a tree in the middle of a giant parking lot in front of the Rose Bowl.

The tree was starved for water and oxygen due to the asphalt that surrounds it (there was a rather small tree pit). The stress from the lack of water and oxygen led to an increase of a variety of pests: anthracnose fungus, lace bugs, powdery mildew… The tree was also in grave danger from the cars that liked to park near it to benefit from its shade. Cars had hit and damaged the trunk, but the cambium had not yet been pierced and the tree still lived. But, it did not live an easy life.

On July 30, 2007, the Rose Bowl placed a permanent boulder barrier around the tree. These boulders protect the tree from cars and provide seating for people to contemplate the beauty of the tree.

The tree had no chance to reproduce on its own, and there was no place for its seeds to grow in the sea of asphalt that surrounds it. This upset me greatly, and I decided to help the tree reproduce.

On February 16, 2007, the first tree baby appeared! Soon, after that there were 200 tree babies growing under the wonderful care of the Theodore Payne Foundation.

I am thrilled that many amazing people have adopted the tree babies. They are caring for them so that they will have easier and greener lives than their parent.

In front of the USC Roski School of Art, a tree baby was adorned by a necklace consisting of sculptures made by students in response to the plight of urban trees and/or environmental renewal. Similar installations have taken place at Walden Elementary School, the Audubon Middle School, and the Walteria Elementary School.
In the Central Arroyo Seco Valley, the City of Pasadena, the Arroyo Seco Foundation, and a group of volunteers planted 17 tree babies – a grove of tree babies extremely close to the parent tree!

I would like to thank Darryl Dunn and Jess Waiters from the Rose Bowl; Steve Madison, Taka Suzuki, and Sid Tyler from the City of Pasadena; Lauri Firstenberg, Bettina Korek, Kris Lewis, and Sarah Williams from LAXART and For Your Art; the Theodore Payne Foundation; Susanne Vielmetter; Stephan Adamski; Liz Rubin; Sue Yank; Germaine Chang; Alison Goldberg; as well as many other important tree lovers, especially all of the tree baby parents.“
Joel Tauber